With Google cancelling free photo storage on June 1st, people are flocking to Mylio to consolidate, organize, manage, and protect their photos.

Google Photos is making some big changes on June 1, 2021. After five years of offering free photo storage for high quality images, Google will start charging anyone who wants to add more than 15GB. Google’s also implementing a new policy where it may delete data from accounts that haven’t been accessed for two years.

Don’t panic yet. Any photos and docs uploaded before June 1st will not count against the 15GB limit, so you have a little time to figure out what to do. But you will need an alternative. Let’s get some numbers straight before discussing next steps.

When one door closes…

At present, every free Google account comes with 15GB of online storage for your Gmail and Drive. Google Photos also lets you store unlimited images for free as long as they’re under 16MP in resolution or you opt to let Google degrade the quality. You can also currently store unlimited videos if they’re in HD.

At the beginning of June, though, anyone who isn’t a Pixel owner won’t get more unlimited storage. For non-Pixel users, all Docs, Sheets, Slides, Drawings, Forms, and photos will count against free storage as well. If you have even a small photo collection, you’ll be at that threshold already. And even if you’re just close, at the rate people are taking photos—and the rate at which smartphone cameras are improving—you’ll hit that cap in no time.

That’s why a growing number of people are choosing Mylio, the photo management solution that’s changing the way the world remembers. Mylio helps you consolidate all your photos, videos, and documents into a single library. Then Mylio puts a copy of that library wherever you tell it to. Want to back up your photos to an external hard drive? Set it up as a Mylio device, and Mylio will put a copy of your library on that drive. Want a copy of that library on your laptop? No problem. What about your phone? Yes, and for devices that don’t have much storage space, Mylio will help you manage its size. Mylio also keeps your library in sync, so any changes or additions you make on one device get synced to the others.

Is that all Mylio does?

Nope. In addition to helping you get your photos where you want them, Mylio will also help you organize those photos, edit them, search for them, and share them. With Mylio, you can organize by location, people, chronology, folder where the photo lives, camera, lens, and many other ways. With all your photos at your fingertips, it’s easy to create slideshows, share digital assets, and catalog your library.

But where will my photos live, now that Google is gone?

With Mylio, your photos live on your devices, so you’re always in control of them. And since Mylio does not depend on the cloud, you can access and manage your photos anywhere, even without WiFi. How does that work? Basically, you can set up any of your devices in one of two ways. A Vault is a device that stores originals, and recommended Vaults include external hard drives, computers with lots of storage space, or NAS devices. The rest of your devices are Optimized, which means Mylio stores a smaller version of your library there to save space. Phones, tablets, and laptops are often used as optimized devices. 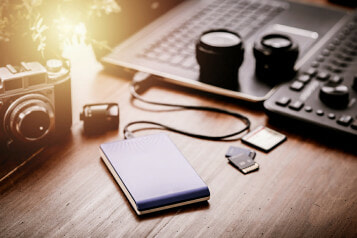 What if I want to keep using Google or another cloud?

People who are used to Google Photos have been storing photos in the cloud. With Mylio, the cloud is an option that you can choose or refuse. Mylio works with Google Drive, Amazon Drive, and Microsoft OneDrive to give you an extra layer of security. And if you do choose to add a cloud service, Mylio can encrypt your files so that no one else can see your personal data. The cloud provides off-site backup of your photos, which is a great way to achieve the US CERT’s 3-2-1 backup recommendation:

3 – Keep at least 3 copies of their data

Professional photo organizer JC Figueroa also advises storing previews on a Mylio-attached cloud. That way, even when you’re away from home, you can edit any photo in Mylio.

Does Mylio have storage limits?

Mylio is free for up to 5,000 files, which for many people is more than enough. The free version lets you sync up to three computers and as many phones, tablets, and hard drives as you want. For people who want even more, Mylio Premium lets you add unlimited photos, unlimited devices, and also includes RAW image editing. If you’re in the market for photo storage—now that Google is cutting you off—Mylio is partnered with Seagate in a deal called Mylio Create. Select drives come with a complimentary year of Mylio that lets you sync 25,000 files, 4 computers (and as many other devices as you want), and includes RAW image editing.

How easy is it to get started?

Mylio makes it easy to get started whether you’ve been organizing photos all along or if you’re just getting started. Here’s a straightforward guide to setting up your Mylio library. For those who already have some folder organization, Mylio lets you import those folders and their contents to save you time. And once you’re in, Mylio has a lot of helpful features to organize as much or as little as you want. Mylio works on and with any device (Windows, Mac, Android, iOS), so even if you have a Pixel and your partner has an iPhone, Mylio can still help you collaborate on your family photo collection.