How To  /  Productivity
Scroll this

JC Figueroa is an avid photographer who specializes in underwater photography and preserving his family’s history in photos. His photo library is an ever-growing collection, so he needs a sensible system to manage it. He works at Mylio as the Customer Champion, leading webinars to teach people how to organize and manage a digital photo library. On January 22, with 30,089 media in his collection, he sat down to share his top seven tips.

7 Tips to Organize Your Digital Photos

2. Organize how you remember

“Different people remember things different ways,” JC commented as he opened his library. Think about how you remember, and organize your photos so you’ll be able to find them. For example, if you remember where you took photos, you’ll want to organize geographically. Map view and geotagging are the way to go, and you can make folders or albums based on your travel destinations. If you remember by when something happened, then Calendar view and dating photos make more sense. Or do you remember who you were with? People view and facetagging (which Mylio can do in efficient batches) will be your friends. Other people might remember how they took the photos – the camera or lens they were shooting with – and still others based on what event they were attending. Organize how your memory works, so you’ll be able to find things when you look for them.

Once you’re clear on how you remember, JC says the next step is to organize your photos into sensible buckets. If you love to travel, for example, create a folder for each of your trips. You can then have sub-folders for each part of the trip. So the top-level folder could be “Europe 2018,” and then the sub-folders would be England, Spain, Italy, and Germany. Or perhaps you take pictures when your family gets together. Your top-level folders could be the years “2017” and “2018” and “2019,” and each one could have sub-folders for “Grandma’s Birthday” and “Steve’s Graduation” and “New Year’s Party.”

Next, JC demonstrated how Mylio has automatic “To Do” lists, if you know where to look. He started in People view, where there is a bucket called “Untagged.” 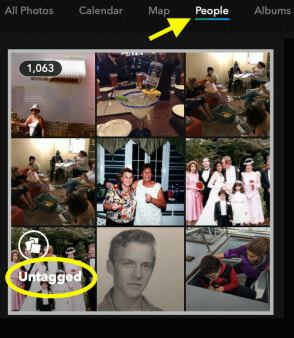 That’s where to find untagged and unconfirmed photos. Open that bucket, and select the Batch Tagging button. For people who have not been identified, type in their first and last names. For people who have been tagged, select the check mark (you can also shift-click to select a range of photos, then confirm). Next he went to the Calendar view and scrolled to the earliest date. There, in a bucket called “Undated,” were photos that didn’t have dates. 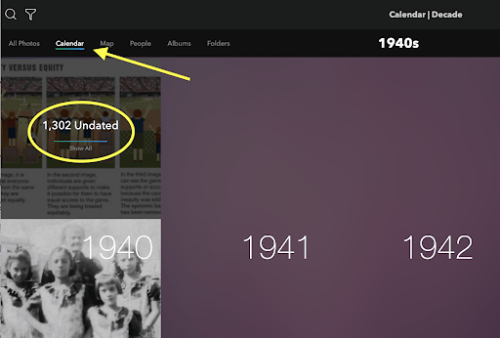 By clicking on any photo or group of photos and opening the Info panel, he could add a date or date range. He said these are great things to do whenever you have a spare minute. Waiting for your kid at soccer practice? Tag a few faces. Got a moment in the doctor’s waiting room? Add a few dates.

JC also had some great tips for explaining the difference between folders and albums. He said, “A folder is the permanent home. It’s where your original lives. An album is a virtual home. It’s a place you can always find a photo, but the photo doesn’t live there.” He strongly recommended having a photo in only one folder. But, he said, a photo can be in as many different albums as you want. That’s because photos in albums don’t take up additional storage space.

He explained with a helpful example of someone who likes to take photos of birds. He said to use folders to store the photos from a single day of shooting (titled “2015-3-14”). Then, have albums for each type of bird you’ve seen over the years: eagles, hawks, owls, hummingbirds, etc. JC went on to provide some useful tips for creating folders. He said that many people like to create a folder for each year, subfolders for each month, and then further subfolders for trips. 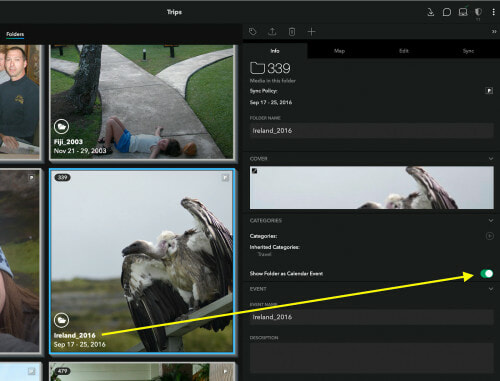 Those trip folders can then be turned into events (using “Show Folder as Calendar Event”), which show up in your Calendar view. Another useful folder JC has is a folder just for scans. “All my scans live in this folder. This scans folder is the default setting for my scanner. They automatically show up in this folder because it’s a source folder. I can always look in that folder and move photos to other buckets.” These tips were starting to make sense.

6. Streamline your workflow with categories, labels, and ratings

Next, JC explained how he uses a combination of categories, labels, and ratings to streamline his workflow. “The goal,” he said, “is to develop your own system. I’ll show you mine as an example.” JC rates all of his photos with stars. A 5-star photo is one of his very best, the top 50 or so photos in his library of over 30,000. A 4-star photo is extremely good, and he has a few hundred. There are also the 3-stars, 2-stars, and the measly 1-stars. If he ever wants to find a set of his best photos, he can filter for either the 5-stars or both the 4- and 5-stars.

JC also uses color labels. For example, he uses the red label for photos that need to be deleted and yellow for photos he wants to edit. Then once a week, he uses the filter to bring up all the red photos and presses “Delete” once, which saves time and clicks. He can also filter for all the yellow labels and immediately pull up all the photos he wants to edit. This is another great way to have automatic “To Do” lists whenever you have a free moment. Finally, JC uses Categories to help refine his photo searches even more. He has categories for family, travel, underwater photography, and many more. Then, whenever he wants to find a photo, he uses the filter bar. “For example, I can filter for all my 4- and 5-star underwater photos, and they all show up instantly.”

7. File names, titles, and captions are your friends

JC’s final set of tips was about captions and keywords. “If you want to be able to type something and pull up all those photos, you’ll want to get into keywording. Get into file names, titles, and captions. You can keyword things as they’re coming in. You can use the folder names as keywords.” He showed me how he could type in the keyword “turtle,” and all of his photos of sea turtles effortlessly appeared on the screen. There were also two PDFs that showed up as well. JC explained that Mylio has a special new feature called OCR (Optical Character Recognition) that detects characters. That way, you can more easily search through documents, find words from signs, or pull up recipes you may have photographed.

Bringing it all together

The ease with which JC perused his library was inspiring. Everything was there, organized and at his fingertips, a few clicks or keystrokes away. He had a sensible system for bringing photos in, sorting and culling, and finding photos quickly.

JC also pointed out that even though he was showcasing his library on his computer, one of the things he loves is having that library synced on whatever device he has with him. His up-to-date photo collection with him everywhere, without him having to re-do all the work on each device. He even told a story from the past weekend where he was on a dive boat with some friends, talking about the Galapagos, because a few of the divers were going on a trip there. Within seconds, JC was able to use his phone to pull up a photo of a red-lipped batfish, a photo he took 14 years ago with a camera he’s long since retired. The guys loved seeing the picture, and this wouldn’t have been possible if the only copy of the photo was stuck on JC’s computer back home.

Along with all these organizational insights, JC explained his system clearly with these seven tips. He made me confident that I could set up my own photo library like this. And so that’s what I’ve been doing. So far I have my photos organized how I remember, I’m creating my buckets, and I’m working through my “To Do” lists. I’m getting organized. And you can, too.

See these tips in action

Want to see JC’s photo library for yourself? Here’s him giving a quick demo of his library, and here’s a webinar he shared with the photo community.